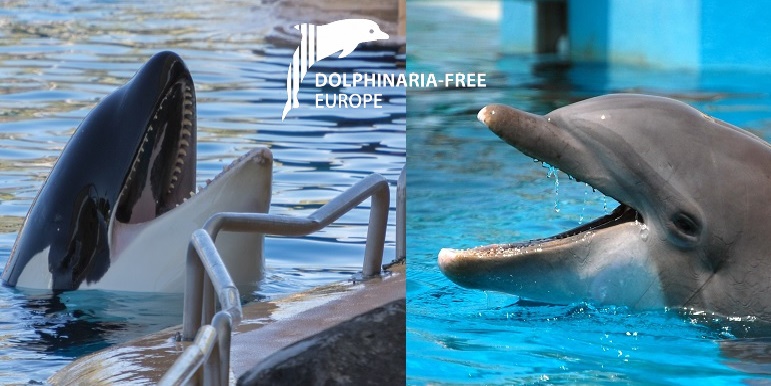 The coalition addresses the ways in which the pandemic has affected, and may continue to affect, captive whales, dolphins and porpoises.

On Friday 13 March, the Competent Authority of the Region of Attica (Prefecture of Attica) revoked the operating licence of the marine mammal facility for dolphins at Attica Zoological Park. This decision by the Region was the result of a longtime effort by organizations, scientists, activists and numerous citizens which took a new turn from May 2019. The effort has been led by Dolphinaria-free Europe (DFE) and the Pelagos Cetacean Research Institute.

For years, DFE has been calling for an end to the illegal dolphin shows in Greece. Two years ago (3/11/2017) the Ministry of Environment had already confirmed the violation of Law 4039/12 (which prohibits all kinds of animal performances for all animals, including shows in zoological parks).

In July 2019, after pressure from DFE, the Veterinary Authority of the Region of Attica conducted an inspection during which it was confirmed that the “educational programs”, the term used by Attica Zoo, were in fact ‘animal performances’ and the Zoo was advised to terminate them, but to no effect.

In February 2020, after many meetings of DFE representatives (as well as others from Sea Shepherd, Greece and My Dolphin Club) with the Directorate of Rural Economy and Veterinary Policy of the Region of Attica, the party ‘Ecological Coalition’ in the Region’s Council also raised the issue during one of the meetings of the Council and called for the implementation of the law. Following this, DFE and Pelagos pushed the Regional Governor again, calling for an immediate end to the illegal shows. On 13th March 2020, the Region of Attica issued its decision to suspend the operations of the marine mammal section of Attica Zoological Park and revoke the license for the dolphinarium. The zoo’s licence should have already been revoked in November 2017, when the violation of Law 4039/12 was confirmed by the inspection body of the Ministry of Environment, as compliance to the law is a condition for the operation of the zoo.

It should be noted that in the courts a trial date was requested to discuss the dolphin shows, however, measures against the spread of coronavirus in Greece currently includes a suspension of the operations of courts.

The efforts to terminate the shows were initiated in late spring 2010, right after the illegal importation of dolphins from Lithuania to Greece and the start of the marine mammal shows for the purpose of entertaining visitors at Attica Zoo. The revocation of the licence of the dolphinarium and the suspension of the shows at Attica Zoological Park constitutes a vindication for all those who have for years demanded an end to the shows and an end to cetacean captivity. We hope that this time the law will be enforced and that the illegal shows will cease once and for all.

Moreover, we are proceeding with DFE’s longstanding call for a legislative measure to prohibit cetacean captivity in Greece, a proposal which has been submitted to all government administrations since 2010. We will continue to work towards the enforcement of the law banning animal shows and the end of cetacean captivity.

Travel group Expedia recently released their new, updated animal policy and it was with disappointment that we noted they have stated they will only promote zoos and aquariums which are members of AMMPA, WAZA and/or of WAZA’s recognised regional and national association members.

This new policy falls short of reflecting current opinion on the keeping of cetaceans in captivity and allows Expedia Group to continue profiting from cetaceans in captivity for entertainment through ticket sales and promotions. In view of this, Dolphinaria-Free Europe has issued a statement, urging Expedia to look again at their policy with a view to revising and supporting the phasing out of shows featuring whales and dolphins.

Following the death of her calf in January this year, Marineland has today reported that Lotty the bottlenose dolphin has died.

The facility report Lotty to be 40 years old and she was one of the last three dolphins moved from the UK when Flamingoland, Yorkshire closed its’ doors in 1993.

In December 2019 Dolphinaria-Free Europe (DFE) reported on information received on the potential export of four orcas currently held at Marineland, Antibes in France.

This had been highlighted to Mayor of Nice, Christian Estrosi who subsequently contacted the facility requesting further information.  Marineland Director-General, Pascal Picot replied stating they have no plans to transfer their orcas to China in 2020.  DFE will, however, continue to monitor the situation closely given the direction France has been taking towards ending the display of cetaceans for entertainment in the country, Marineland owners Parques Reunidos may well decide to move the whales at a later date.

Although the coalition’s goal is to end the keeping and breeding of dolphins and whales in Europe, moving the orcas at Marineland to China would be totally unacceptable, as previous investigations of a selection of marine parks in the country showed the animals suffer shocking abuse and cruelty with welfare given little priority.

Dolphinaria-Free Europe (DFE) members One Voice (France), have advised the coalition that the owners of Marineland, Antibes are planning to transfer the four orcas currently held at the facility to China.

Inouk, Wikie, Moana and Keijo were all born at Marineland and the plans may also involve the transfer of Inouk’s sister, Shouka (sent to Six Flags Worlds of Adventure in May 2002 then to Six Flags Discovery Kingdom in April 2004 before being moved to her current location, SeaWorld San Diego in August 2012.  DFE fully supports the campaign and have written to President Macron asking him to intervene to stop the move.  We are appealing to the new owners of Parques Reunidos, who have the means to invest in the establishment of an orca sanctuary, to consider this as an alternative to moving the orcas to China.

Please support the campaign by signing the petition today and help stop this transfer, planned for January 2020.