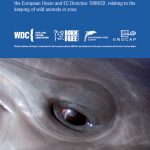 In 2011, together with other internationally recognised NGO’s DFE produced an EU ZOO INQUIRY review; EU Dolphinaria, which investigates the keeping of whales and dolphins in captivity in the European Union and EC Directive 1999/22, relating to the keeping of wild animals in zoos. Published in 2011 the report is also available in both French and Spanish.

The summary of that report is:
Cetaceans, are kept in 32 dolphinaria in 15 EU Member States. The majority of the reported 309 captive cetaceans in the EU are bottlenose dolphins (Tursiops truncatus and Tursiops truncatus ponticus) but the captive population also consists of orcas (Orcinus orca), belugas (Delphinapterus leucas), harbour porpoises (Phocoena phocoena), and an Amazon River dolphin (Inia geoffrensis ).

The majority of these animals are kept for display and performance, in purpose-built tanks and some facilities offer ‘swim-with’ opportunities, Dolphin Assisted Therapy and souvenir photographs with the animals.

As of 2011, all EU Member States but one regulate dolphinaria under the EC Directive 1999/22, relating to the keeping of wild animals in zoos. This provides a framework for Member State legislation that is implemented
through the licensing and inspection of zoos and which aims to strengthen the role of zoos in the conservation of biodiversity.

Data was collected from 18 dolphinaria and reviewed together with scientific literature, web-based resources and publically-available information from the 34 dolphinaria that were operating the EU in 2011.